This weekend Chris, Paul and Jon headed up to Sheffield to take part in the inaugural National Badminton Club Bash. Organised by Abbeydale Park Badminton Club, it's a new event for badminton clubs around the country to play badminton, socialise and have fun whilst raising money for charity (Solibad)! Over the course of the weekend the event welcomed players from Yorkshire (Abbeydale Park B.C.), Lincolnshire (Cross O'Cliff B.C. and Sleaford B.C.), Lancashire, Nottinghamshire and Gloucestershire (us!).

On the Saturday evening we had free reign of the 5 courts available at Abbeydale Park for a couple of hours which gave us the opportunity to meet some of the players from the other clubs and play some friendly games. Some players had the opportunity to play against Chloe Birch - BADMINTON England, Loughborough NBL and Abbeydale B.C. player. Afterwards we headed down to the sports club bar for food, drink, chat and the raffle (drawn by Chloe). Unfortunately luck wasn't in our favour and we missed out on a top of the range racket (Yonex Voltric 70 E-Tune), a bottle of Chateuneuf-du-Pape, a Yonex racket bag and a signed t-shirt! :(

The main competition kicked off on Sunday morning. Sorting out a format that is able to keep games fun and competitive is pretty hard when you know very little about each player's ability and how a league standard in one county compares with the standard in others! Luckily, however, Ian managed to devise an experimental format which gradually assigned handicaps to players as matches were played whilst allowing players to continually swap partners and opposition:

Although not perfect, the format produced a number of extremely close, competitive matches. I particularly had fun partnering Tommy (the eventually winner) in the final round in which we started each game on -17 (he was on -10 and I was on -7 at the time)!

Overall, we thoroughly enjoyed the weekend. We got to play plenty badminton, had lots of challenging games (the standard was quite high!), met loads of really friendly players and so are already looking forward to being able to attend again next year. A big thank you to Ian Sills from Abbeydale for organising the entire event and inviting us along. If you like the sound of the event then please come and have a chat with me, it would be great to send more players from our club next time! 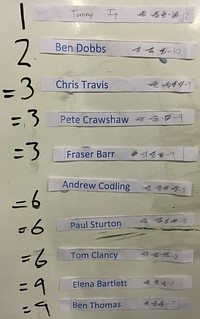 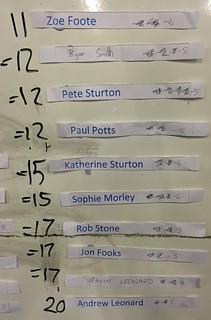