Last Saturday (5th September 2015) it was our turn to host the Annual Pink (Shuttle)Cock Tournament again. The tournament saw players from Wandering Star Badminton Club in Cardiff make their way over to Cheltenham to try to retain the coveted pink shuttlecock trophy for another year. Having been unable to prevent this for the previous two years, Paul was determined to stop this from happening again so recruited a large number of our members to play against them. We certainly had the quantity, we just had to hope that we could muster up the quality too. We even set up a refreshment / temptation station in the hope that this would help slow them down on court.

Unfortunately they stuck to the healthy snacks on offer (Paul's melons!) and, despite our best efforts, Wandering Star were able to just edge ahead in the inter-club matches winning 8-7. Although we narrowly missed out on the win, everyone had a great time on court playing plenty of games over the 3hrs. It was great to see that our ladies weren't scared of taking their men on too. Afterwards we headed to the Golden Mountain chinese restaurant for a well deserved meal and drinks. During the meal Paul congratulated Wandering Star on their win by presenting Geoff with the Pink Shuttlecock Trophy and a certificate.

Thank you to all the players who competed, especially those from Wandering Star who made the trip over. We've slowly been narrowing the gap between the score line over the last three years so we are looking forward to making our way over to Cardiff next year. We've got a feeling that next year will be our year! :P 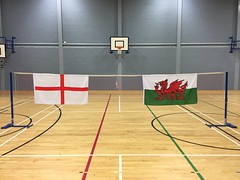 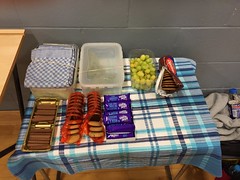 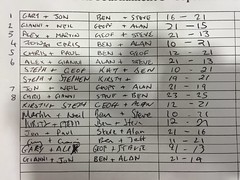 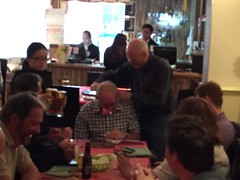