This evening I managed to get 4 teams together again to play some friendly matches. The idea being to give players who don't currently play in local leagues / tournaments the chance to experience playing some competitive badminton, and to supplement the matches that low-level league players compete in - it has, unfortunately, become common for teams to drop out of divisions and so some teams end up playing only a handful of matches during the season :(

This time we had 2 teams from Pittville, 1 from Balcarras and 1 from Brockworth Nomads. We followed the Gloucestershire Badminton League Levels match format which meant that we had enough time for each team to play 2 matches during the 3 hours that we were playing. Thanks to all the players who turned out to play despite today being a bumper day for spectators of sports (F1 British Grand Prix, Tour de France, Wimbledon Finals, Euro 2016 Final), I hope you enjoyed it. Congratulations to Balcarras who won both of their matches:

(*) The score on the match card says 6-6 because a game was forefit due to one of the Balcarras players turning up 45 mins late - however, we ended up letting the score line be based on the games that were actually played because we are nice ;) ... plus we didn't have enough time to play / calculate a tie breaker :p 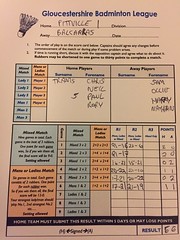 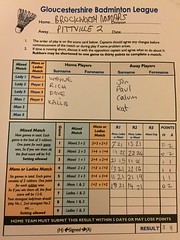 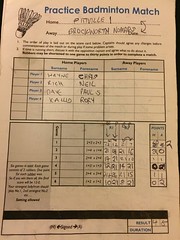 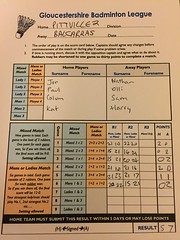